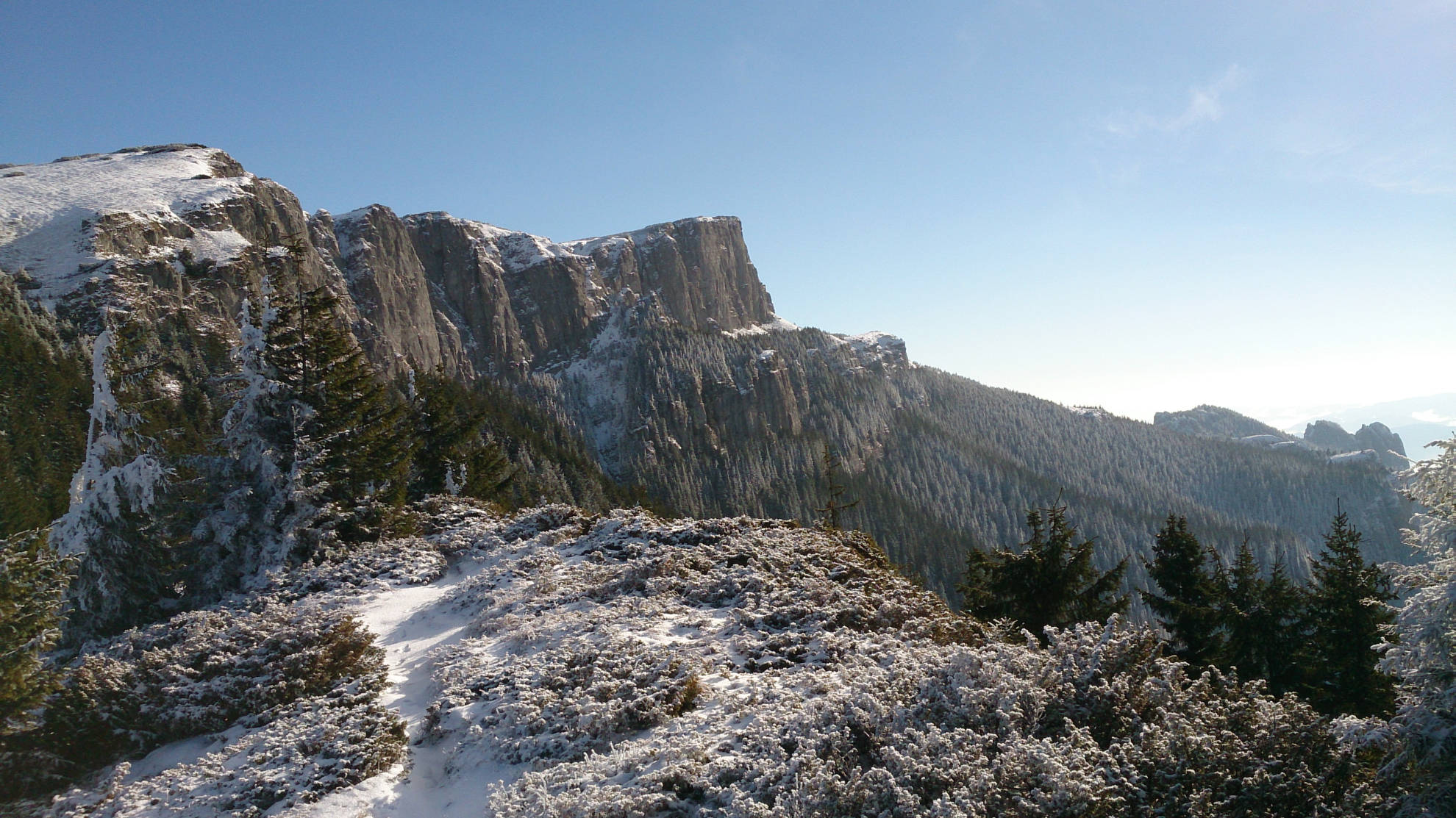 The result of a long and complex geologic evolution, Ceahlau Mountain lays, from a structural aspect, in the area of internal Cretaceous flysch, with the exception of the south-eastern sector that belong to the external flysch.

The geological structures from the internal Cretaceous flysch belong to the Ceahlau frieze (in the western and central part) and to the Teleajen frieze (in the east of the protected area).

Ceahlau frieze: from the point of view of lithology, there are thick deposits of grindstone, clay, adobe, conglomerates, etc. positioned in folded and faulted belts, facing north and south. Conglomerates, also known as “Ceahlau conglomerates”, are found in thick deposits of 500-600 m. They form an enormous depression in the central part of Ceahlau National Park, limited by impressive slants. These were formed during the natural cementation of some fluviatile gravel, over 100 million years ago, at the end of the inferior Cretaceous.

Beds of grindstone and olistolith lime, known as klippes (tall blocks of lime) can be found in the Ceahlau Conglomerates. The Klippes are situated on two altitude levels: the first level is at the 1500m altitude (the Lime from Piatra cu Apa) and the second is at approximately 1650 m, in Ocolasul Mic.

The following stand out in the external flysche of eastern Ceahlau: Audia frieze, with a width of approximately 800m, formed of black schists (Audia beds), red, green and black adobe, as well as geological structures that belong to Tarcau frieze (Tarcau grindstone). 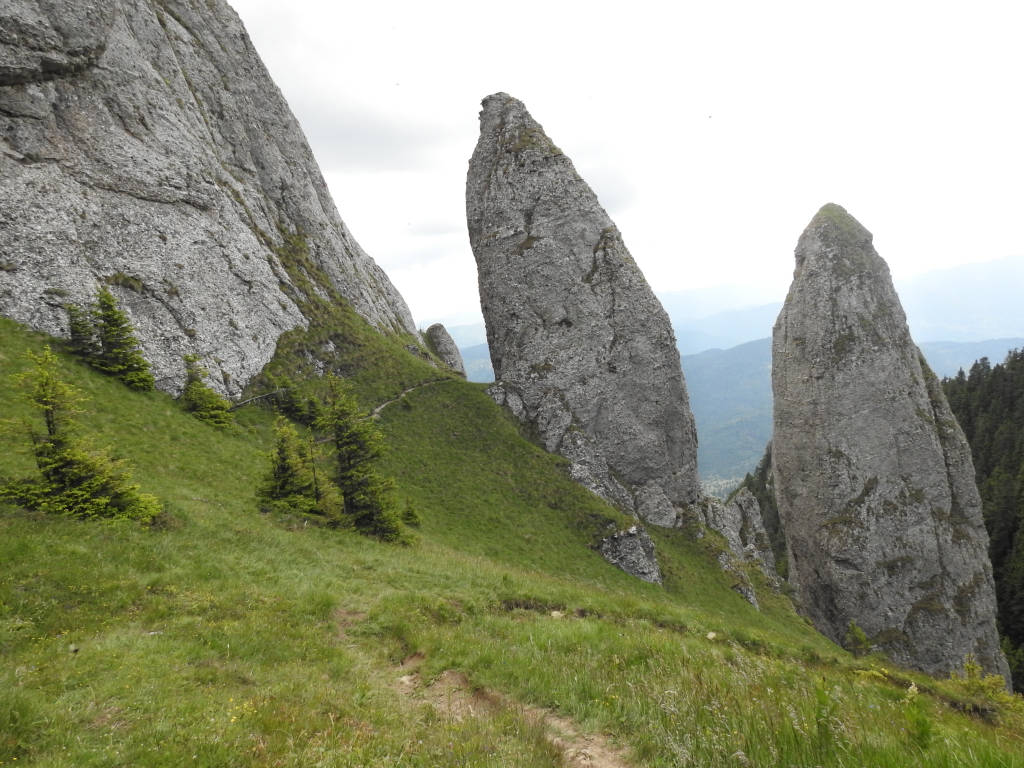 The relief bears the mark of geological and lithology structures. The central subunit of Ceahlău Mountain is an enormous suspended depression on Ceahlău Conglomerates. The superior plateau corresponds with the arched surface of the depression, whose extremities are also the highest in altitude: Ocolaşul Mare peak (1907 m) in the southernmost part and Toaca peak (1904 m) in the northernmost part. Between the two peaks, the plateau crosses approximately 5 km in length and 1 km in width.

The plateau is limited by tall slants reaching 200-300 m, grooved by avalanches, shingles of rolling debris, dark vents. The most impressive slants can be found at the origin point of Izvorul Muntelui and Maicilor Rivers, as well as in Piatra Sură. In some cases, the walls of the slants are fragmented in steps, which bear the local name of “poliţe”. They are well known as “Poliţele cu crini” and those behind Ocolaşelor.

Another characteristic is the micro-relief formed by rocks with bizarre shapes: towers, columns, reeks or pyramids. Their ruinous aspect is due to the erosion of the conglomerates, as well as to their alternation with grindstones and adobe stones. Impressive are Clăile lui Miron, Căciula Dorobanţului, Panaghia, Cetăţuia şi Călugării, Detunatele, Dochia, etc. Piatra Sură, Bâtca Neagră peak is also imposing in aspect, being similar to a “pole” of rocks that rises nearly vertically (hog-back), which closes the beautiful Stănilelor Glade to the west.

In the gray matter of the conglomerate, the white rocks of some adobe klippes stand out (enormous adobe rocks sedimented in the conglomerates), situated on Piatra cu Apă, Ocolasul Mic plateau or Izvorul Alb valley (the well known Dochia Rock).

A considerable train of debris formed at the base of the slants, surrounding the conglomerates and covered in dark pine forests. Gigantic blocks of stone, fixed and masked, frequently detach in the conglomerates, mainly due to the forest vegetation, some reaching impressive extents.

Peripheral subunit: the elongated peaks of Munceii Ceahlăului can be seen surrounding the tall central part of the mountain. Formed of rocks less resistant to erosion, they are arranged in an alternance of taller peaks (named “bâtcă”), separated by “saddles” (locally known as “curmături” or “tarniţe”). Mostly forested, the peaks do not surpass 1300m in altitude and cross the limits of Ceahlău National Park, towards the main valleys that surround the mountain.

Ceahlău Mountain is a true “water castle”, its hydrographic network having a divergent aspect, until finally being collected in Bistriţa River. Their water intake is supported mainly by underground streams. 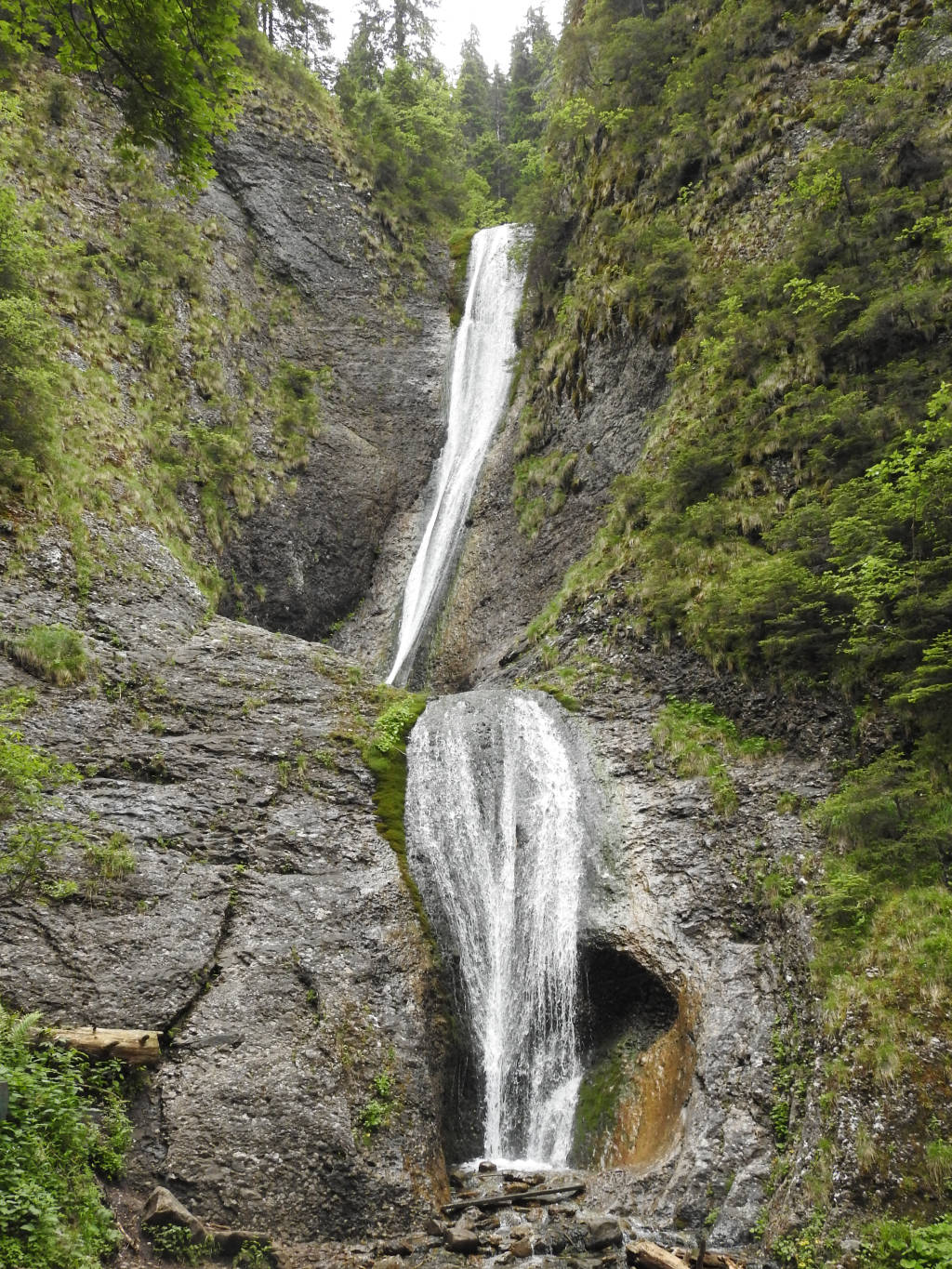 Bicaz, the third river in size amongst Bistriţa’s tributaries, limits the mountain to the south, beginning from its confluence with Jidanului (Caprei) River and until Bicaz city.

The main rivers in CeahlÄƒu have their streams underneath the slants, at heights between 1250m and 1300m, where they drain the underground waters quartered in the debris. With the exception of Pintec River, all water flows have their origin point inside Ceahlau National Park, and all are relatively short (exception being Bistra River which has 17 km in length). Among these, Pârâul lui Martin, Schitul, Slatina, Tiflicul, Izvorul Alb, Izvorul Muntelui, Bistra and Neagra are more important.

Along the longitudinal profile of the rivers with the origin point in Ceahlau, you can see many breaks in the stream (Rupturi River on Izvorul Muntelui, Bistra Mare and Bistra Mica), caused by the presence of lithology horizons that are more resistant to erosion. The most representative example is Duruitoarea Waterfall, where the waters of Rupturi River swoop upon two steps from a height of 25m. 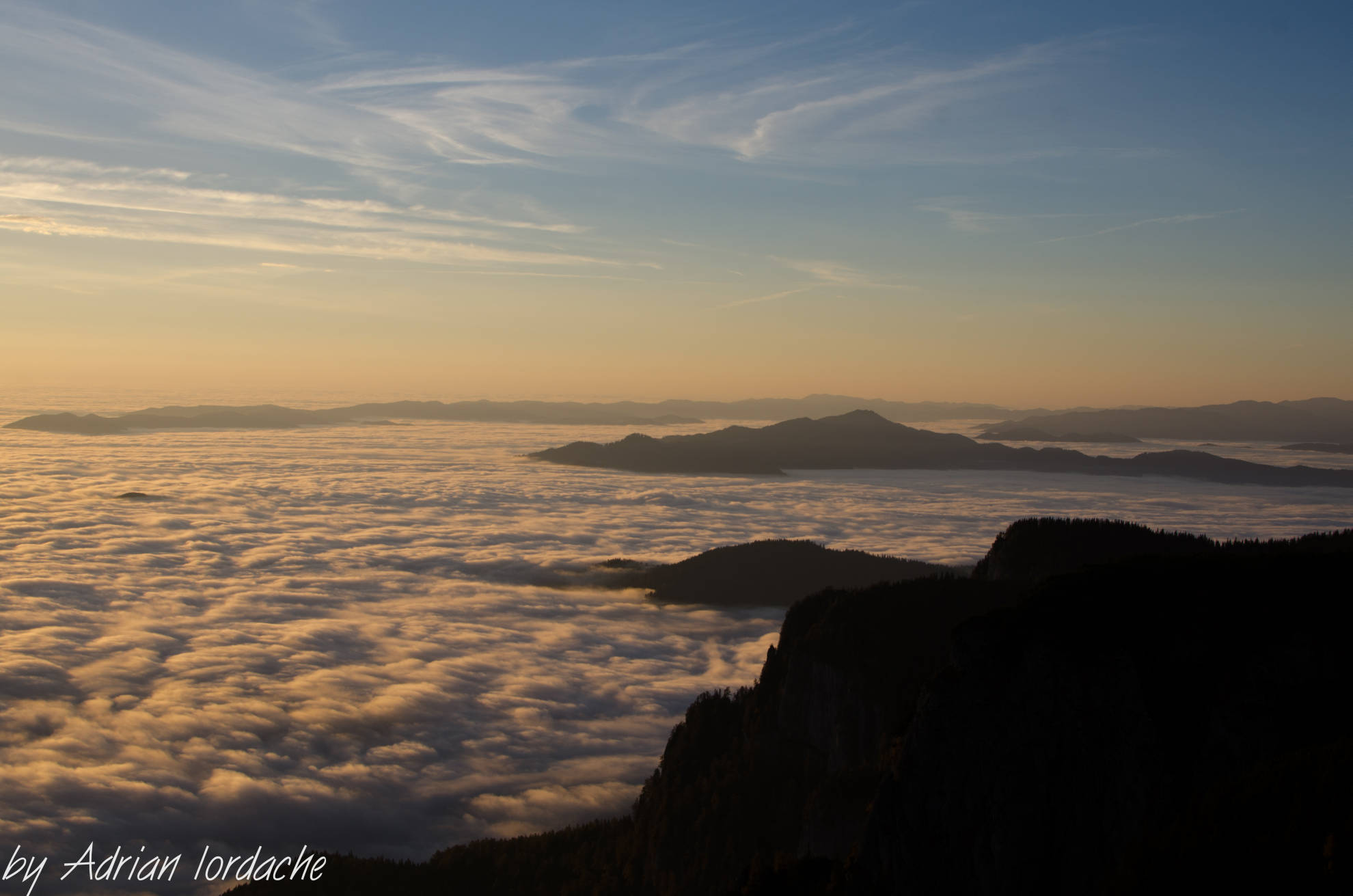 Ceahlău Mountain is classed in the mountain climate territory (low mountains, with altitudes between 800 and 1900 m), Oriental Carpathian climate sub-territory.

The climate conditions in Ceahlău are guided both by altitudinal zones (climate floors) and the result of local conditions (different displays of peaks, type and degree of vegetation coverage, etc.) that determine some topo-climate specifics. As such, the territory of Ceahlau National Park is a mosaic of natural topo-climates that, joined in a huge puzzle, make up the complex topo-climate of Ceahlău Mountain.

Air temperature varies with altitude. The lowest caloric values were recorded on the superior plateau, while the highest at the base of Ceahlau Mountain. On the highest peaks of Ceahlau, during 193 days a year, the temperature stays below 0 degrees Celsius, while only 133 days are below freezing point on lower altitudes.

The caloric difference between Toaca Peak and Ceahlău village, looking at the average annual temperature, is 6.5 degrees Celsius. The thermal aplitudes between monthly averages are lower in the winter as a result of thermal inversions on the bottom of the valleys, the inversions being more frequent and more intense during the winter season.

The wind reaches its top speeds at the peaks and on the superior plateau, while the circulation of air currents is more active in the main valleys. The average speed of the wind is 6-8 m/second during summer and 12-14 m/second during the winter. However, speeds up to 40-50 m/second are often reached.

Exposed mainly to atlantic currents influence, the number of rainfall laden days is considerable (208.8 days/year, of which 50% is snow). The average of rainfall is over 700 mm, 60-70% of it recorded during spring and summer. Snowfall may occur in any month of the year. A distinct phenomenon is the fog that is present 70% of the year.