Ceahlau Mountain, that houses Ceahlau National Park, is situated in the central part of the Oriental Carpathians, in the south-east part of Bistrita Mountains, at the crossing of the 47 degree parallel, north latitude with the 26 degree meridian, east longitude.

Due to the numerous legends woven around the mountain and its majestic appearance, compared with surrounding mountains, Ceahlau is considered to be a true Olympus of Romania.

The mountain is clearly bordered to the north, east and south by the Bistricioara, Bistrita and Bicaz River valleys. The western border, less clear cut, is correlated with Pinticului and Jidanului river valleys.

The limits of Ceahlau National Park are presented in Annex 1 of H.G. nr. 230/2003. The park spans from the south to the north between Fagetel peak (1165m) and Coacazului Glade (Piciorul Humariei), over approximately 15 km. 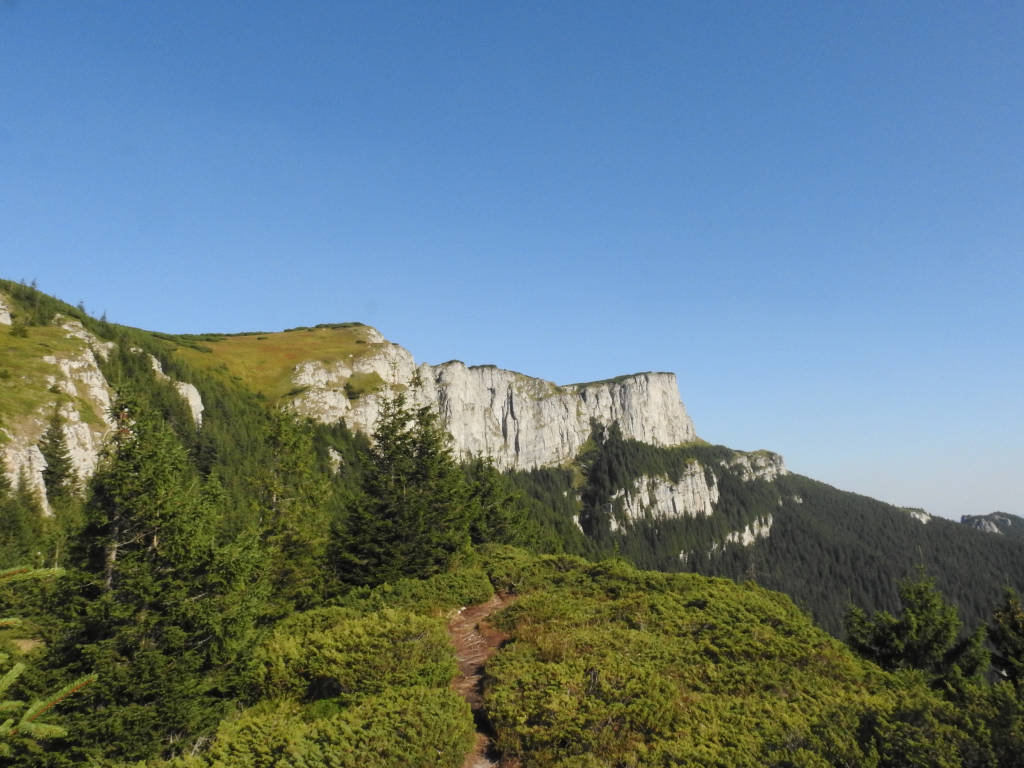 The central part of the mountain is represented by an enormous suspended depression made up of harder rocks (Ceahlau conglomerates). It is formed of two major lithology structured steps: Ocolasul Mare Plateau and Ocolasul Mic Plateau, separated by a dip of approximately 200 m.

The superior plateau corresponds with the arched surface of the depression, Ocolasul Mare peak (1907m) limiting it to the south and Toaca Peak (1904m) limiting it to the north, while the lowest side of the depression corresponds with the plateauâ€™s axis. The plateau spans over nearly 6km in length and over 1km in width in its southern side. Between Ocolasul Mare and Toaca, above the tall plateau, you can see peaks rising to below 1850m: Batca lui Ghedeon (1845m) and Lespezi Peak (1805m), many structural steps appearing on its flanks (polite).

The plateau is limited by impressive slants fragmented by the origin points of the numerous rivers. The long lasting action of the rains and winds sculpted the conglomerates situated of the border of the plateau, creating rocks with bizarre shapes and ruinous aspects that were the muses for the famous legends of Ceahlau Mountain (Ocolasu Mare Towers, Panaghia, Claia lui Miron, Budu Tower, Detunatele, Caciula Dorobantului). The lighter coloured klippes from Piatra cu Apa, Dochia Rock, Ocolasul Mic, Izvorul Alb or Budu Tower stand out in the mass of conglomerates. Huge trains of debris lays at the base of the slants, covered in millennial forests.

Also in the tall step of the mountain lay Piatra Sura (1525m) and Batca Neagra (1398m) peaks, rising from a belt of conglomerates similar to that of Ceahlau Mountain. The peaks are hog-back in style and are separated from the plateau through Stanilelor Glade saddle.

The second step of the relief formed around the central part, lower and more fragmented â€“ Munceii Ceahlaului. These small mountains take over nearly 2/3 of Ceahlau Mountain and are populated with peaks reaching 1000-3000 m in height. The peaks are rounded and have a wavy longitudinal profile, due to the alternance between the higher peaks and the saddles between them (called curmaturi or tarnite by locals).

The peaks detach from the mountain in a radial aspect in the south and east, from below the slant of the central plateau, while they are parallel with the mountain in the west. The peaks are split by numerous rivers that have their origin point in the tall areas of the mountain, and impose a might of the relief between 400 and 500 m. among these peripheral peaks, Obcina Lacurilor, Obcina Tarsoaiei and Obcina Boistea from the longest interfluves in the west of Ceahlau, that separates Slatina river valley from Bistricioara river valley.

In the south and the east the peaks are even more fragmented, their morphology becoming more and more complex. Beginning from Izvorul Muntelui River, looking towards the west, you can see: Sima Mountain, Obcina Piatra Arsa continues with Duboasa Peak, Obcina Chiliei, Obcina dintre Bistre, Obcina Tablei and others.